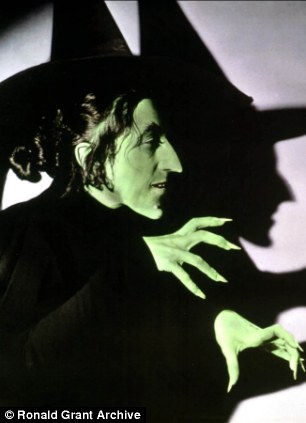 One of the key physical attributes of the Wicked Witch of the West is her green skin. The unique colour of her skin is her main identifier, allowing characters from the world of Oz, as well as the audience, to instantly recognise her. Baum’s original character did not have green skin, and was described as an old woman with three pigtails and one eye. However, the 1939 film reinvented the character, giving her green skin, possibly due to the film’s use of Technicolor.

The majority of reversionings have the character with green skin, although there are a few that decided against it, for example The Wiz. In reversionings such as Wicked (both the novel and the musical) and Oz the Great and Powerful, the character’s green skin is a large part of the plot.

In the 1939 film, although her actions certainly make her the villain, it’s her physical attributes that cause characters to view her as wicked. Her green skin, warts, and overall ugliness frighten the citizens of Oz:  “she’s wicked because she looks wicked” (Bremer 2009 p. 13). Good Witch Glinda even states that “only bad witches are ugly”. If the Wicked Witch of the West was as beautiful as Glinda, she may have been less feared, even with her actions. 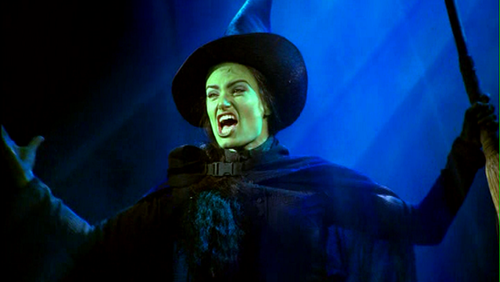 As the 1939 film is a musical, a fair amount of the story is told through song, with the Wicked Witch of the West being one of the only main characters who does not sing. This is something Gregory Maguire wanted to explore in his novel: “If we had heard her sing . . . could we have stayed quite so terrified of her?” (Maguire 2014). In Wicked: The Life and Times of the Wicked Witch of the West, Elphaba sings at a funeral, and is described as having a good voice. This is expanded upon through the Broadway musical Wicked: The Untold Story of the Witches of Oz, where the character sings in a fair amount of the songs.

Elphaba’s ability to sing “humanizes her and gains audience sympathy” (Boyd 2010 p. 110) by sharing her emotions and private thoughts through song, something the Wicked Witch of the West in the 1939 film does not have the chance to do. The lack of singing ability “reduces her . . . to a one-dimensional character” (Boyd 2010 p. 106), one the audience sees as evil, because most of the good characters can sing.

The musical Wicked is not the only reversioning where the Wicked Witch of the West sings, although it is the only one where the Witch is the protagonist. The song the Witch sings in The Wiz, “No Bad News”, does not particularly contribute to the development of the character.

However, in Andrew Lloyd Webber’s 2011 West End musical based on the 1939 film, a new song is created for the Wicked Witch of the West. “Red Shoes Blues” reveals the Witch’s motives behind her desire to obtain the ruby slippers, advancing her character development and deepening the audience’s understanding of her. This was potentially inspired by the success of the musical Wicked. 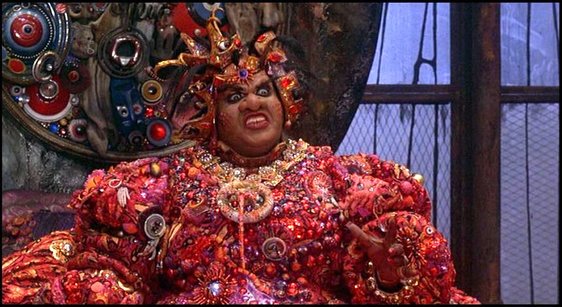 Through many reversionings, the Wicked Witch of the West’s personality changed immensely. Baum’s original character is quite tame in comparison to later versions, and there’s “no clear indication that she desires to see harm come to Dorothy” (Edwards & Klosa 2009 p. 38), although she is still considered to be wicked.

The 1939 film expands the role of the Wicked Witch of the West greatly, evolving her personality along with it. The character is much more wicked than she is in Baum’s novel, threatening the lives of Dorothy and her companions frequently. While her motivations are not explicitly stated, the Witch’s “motivation appears to be nothing more than naked power” (Edwards & Klosa 2009 p. 38), reinforced by her cruel actions when attempting to acquire the ruby slippers.

The Wiz takes this cruelty even further, with the Wicked Witch of the West portrayed as a “sadistic tyrant and probable cannibal” (Burger 2012 p. 63). Evillene, as the character is known as, is the slave lord of an underground sweat  shop, and brutally tortures Dorothy and her companions.

The Wicked Witch of the West receives the most dramatic personality change, however, in Gregory Maguire’s novel Wicked: The Life and Times of the Wicked Witch of the West, as well as the Broadway musical it inspired. In both, the character, known as Elphaba, is the protagonist in the eyes of the audience, although many characters see her as evil. Wicked explores how the character became known as wicked, but also portrays her as a compassionate animal rights activist, though she does have flaws, “shifting between violence and charity” (Burger 2012 p. 64).

The musical is a lot lighter than the novel, therefore so is the character. She is still compassionate and charitable, but her relationships are at the forefront of the story, particularly her friendship with Glinda. Past reversionings of the character are not shown to have any positive relationships at all, for example the character in the 1939 film. The ability to love makes both versions of Elphaba stand out amongst the rest, who are mostly considered to be pure evil.

Theodora from Oz the Great and Powerful may be the exception to this. She is not initially evil, and falls in love with the Wizard of Oz, similar to how Elphaba falls in love with Fiyero in both versions of Wicked. Eventually, her heart is broken by the Wizard, and her sister gives her a magic apple that will supposedly cure her, but instead it turns Theodora’s skin green and takes away all the good in her heart, making her evil. Compared to Wicked, Theodora’s character development is quite weak, however, Theodora actually becomes wicked, while Elphaba is simply labelled that by society, a clear difference between the two characters.

The evolution of the Wicked Witch of the West’s personality is just as important, possibly more important, than her physical evolution, due to reversionings such as Wicked.

Create your own unique website with customizable templates.
The Evolution of the Wicked Witch of the West